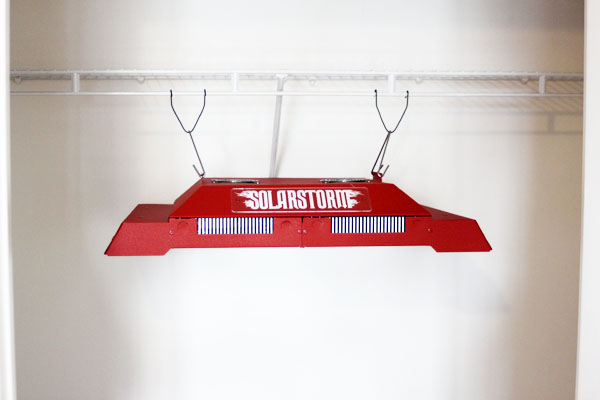 Recently California LightWorks ran an advertisement in Maximum Yield and High Times. This has led to me receiving an onslaught of questions about their new LED grow lights: the SolarStorm and the SolarFlare. When enough people ask about a light I try my best to do a review on it. Initially I was planning on going with the SolarFlare, but I decided to go big this time and got my hands on the 800W SolarStorm. Now I’m just trying to find a space in my house where I can start growing (all my normal spaces are already occupied with other LED grows).

P.S. I’m sad to say that I’ll be giving this bad boy away to one of my lucky readers (I’ll miss the time we had together).

Let’s get to the review.

The owner of California LightWorks (George Mekhtarian) is an exceptional guy and he has been known to answer customer questions with unbelievably long emails or phone calls.

California LightWorks has a contact form that works (which is more than I can say for some of the companies I’ve contacted) and a phone number that you can use to get a hold of them.

These lights are pretty hot off the market so it’s hard to say how warranties and customer service will be handled (will the warranty really be hassle free?). That being said, California LightWorks has an A+ score from the Better Business Bureau. California LightWorks was previously known as MWW Inc. and it appears that in its 13 years of history the company has never had a complaint filed against it (that’s saying something). I haven’t run into very many companies that have an A+ score from the BBB.

California LightWorks offers a two year warranty on both the SolarStorm and SolarFlare. This is about on average with the industry (although some companies are now offering 3 year and 5 year warranties—I even saw one offering a lifetime warranty, though that’s likely a marketing ploy). For now, I’m giving George and his company the benefit of the doubt.

California LightWorks really knocked it out of the park with build quality. I highly recommend you read this interview with George (the owner). Focus on the part where he talks about junction temperature.  The guy knows what he’s doing.

This is the only LED grow light I know if that is actually assembled in the United States. All the other companies do the designing here in the USA, but then they outsource the assembly to China.

The SolarStorm comes with peak wavelengths of 450, 470, 620, and 665nm. It also has light in the warm white area of 430 to 700nm. Perhaps its most intriguing feature is the UVB light in the 280-315nm range. There have been a couple of studies showing that Tetrahydrocannabinol (THC) is positively affected when UVB light is added.

In my opinion, the UVB light isn’t a big deal, but it’s still a nifty little addition (I flip it on during flowering!).

The SolarStorm draws a lot of juice.

I’m a huge fan of this light, but I wouldn’t recommend it for everybody. The one weakness in the SolarStorm is that it puts out a lot of heat for an LED grow light. It definitely puts out less heat than an HPS, but this baby got my grow room heated up in a hurry. In other words, if you don’t have a good cooling system in place and you’re looking for a stealthy grow, I wouldn’t recommend the SolarStorm.

You see normally LEDs with a 120 degree beam angles don’t have much power when you get a foot or two away from the light source. That’s because most LEDs are using either 1 watt diodes or 3 watt diodes. The SolarStorm and SolarFlare are the only two lights I know of that use a true 5 watt diode.

The combination of the 120 light angle and the five watt diode make for a pretty wicked combination (you get width and depth). The light gave great coverage for my 5.5’ X 3.5’ closet. That’s over 19 square feet. Take a look at some of the pictures from my grow (you can click on any of them to make them larger). 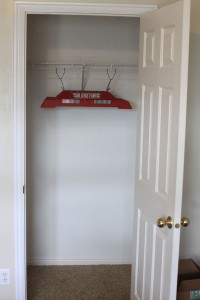 Because the light is so powerful I placed it farther away than I normally do with an LED. This proved to work to my advantage because the plants still got the necessary light and my coverage was even better. 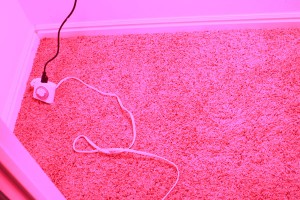 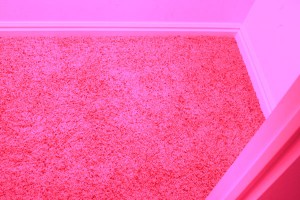 The above is actually two pictures that I squished together on my website in hopes to show you how great of coverage I got with the light (very happy about that as you can tell).

Below are some more pictures from my grow (again, click on them to make them larger).

Can I just say that I’m very happy with how this grow is progressing. My indoor maters are completely dominating the tomatoes that I planted outside at the same time. I know, it’s not a fair competition because I can force my indoor maters to flower, but still pretty cool stuff.

The SolarStorm might be the biggest and baddest light on the market. The feature I liked the least about the light is the amount of heat it put out when compared to other LEDs. The feature I liked best about the light is the absolutely genius idea of mixing five watt diodes with a 120 degree beam angle. This light gives you great coverage area when compared to other LEDs. You can read my interview with California LightWorks to see their opinion as to why they’re the only company that’s able to get away with using 5w diodes.

Feel free to ask me any questions you have about the SolarStorm or SolarFlare. I’ll be getting details up about how you can win my SolarStorm in the near future.