Recently Apache Tech has created quite the buzz in the LED grow light industry. This buzz was generated because the company inked deals with both NASA and Stanford University. The LED growing industry is relatively new and growers are eagerly waiting for a clear winner to emerge. Many are hoping that Apache Tech might be the company that creates the light that finally obliterates traditional HID lighting systems. The question remains, is the hype warranted?

Unfortunately I haven’t been able to get in contact with Apache Tech despite numerous attempts. After looking over their website it appears I’m not the only one having problems contacting them. Here are some recent comments on their Facebook page:

I’m still trying to get a hold of the company so I can ask them some more questions about their lights (so far they have refused to be interviewed): here’s hoping that they see this post, change their mind, and contact me. With the limited information I do have on their lights, below is my review:

Usually the first step to reviewing any LED grow company is understanding the lights they offer (this is usually easier said than done due to the fact that most companies offer a plethora of lights all with weird names). Apache Tech Inc. is pretty straight forward; they offer three different plant-growing lights that appear to only differ based on their color output. Their three lights include the 120 red/blue, the 120 white, and the 120 white/red. We’ll be reviewing the 120 red/blue because it’s the light they offer the most information about. It’s also the light that I think most of my readers will be interested in. 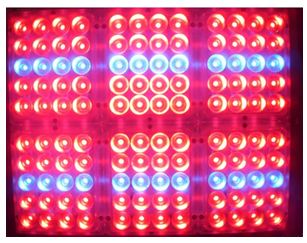 Apache Tech offers a two-year warranty (parts of their website still say one-year). This is right on par with the rest of the industry leaders. Two years is a good length for a warranty in my opinion.

Note that I haven’t actually ordered a light from Apache Tech. That being said, I’ve tried to get a hold of them on multiple occasions and so far have not heard back from anyone (it’s been over a month now). This is not a good sign obviously, but I’m hoping that it’s just part of the growing pains of a new company (either that, or they just don’t like pesky customers like me).

The light appears to have great ventilation which is important for the longevity of the light. Their heat sink is patent pending and I can tell from what I’ve read that they have actually put a lot of thought and resources into their heating/ventilation system. I’m pretty sure the people at NASA understand the importance of heat sinks better than anyone so I’m giving Apache Tech an A- on their heat sink. Here’s a great video looking at the inside of this light. 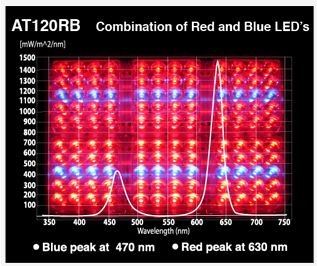 The AT 120RB has a blue peak at 420nm and a red peak at 630nm. This seems pretty basic compared to most of the industry leaders who are now coming out with 5 to 11 band lights. It’s true that more bands doesn’t necessarily mean a better light, but simply having a red and blue peak seems a little behind the times.

The Apache Tech 120w RB has an actual power consumption of 156 watts. This is a good draw amount and is on par with the industry leaders. The maximum coverage area I would suggest for this light for growing a plant start to finish would be around four square feet. For the vegetative stage you could probably get a bit more out of it: 6-8 square feet.

Read here to understand more about why actual watts drawn are important.

Perhaps it’s because Apache Tech is new to the industry but they are making some of the same mistakes that most LED companies make when they get started. The biggest mistake they are making in marketing is saying that their 120w LED lights are better than 600w HIDs and comparable to 1000w HIDs. Here’s a quote from their website:

I realize that what they said there is at least partially true, but LED grow light consumers are tired of being burned by over-hyped marketing. Are you honestly telling me that one of your 120 watt lights is going to grow my plants from start to finish just as well as a 1000 watt HID light? In other words, am I going to get similar yields with your 120 watt LED as I do with a 1000 watt HID? I think not my friend!

I don’t think that’s a claim that any LED company can back up right now and it simply scares consumers away at this point. If your LED can only produce similar growing results to a 150 watt HID then just tell me so I can make an informed decision. Most people want to move towards LEDs anyway because of the energy savings, but they need to know what they can actually expect in terms of growth.

My guess is that the 120RB from Apache Tech is probably somewhere close to a 400W HID in terms of actual yield capability. That’s still pretty amazing if you asked me considering the amount of energy you are saving. I just wish companies would be more straightforward about this.

Here’s some more reading on 1 watt vs. 3 watt LED chips for those interested.

If I ever get a hold of the guys over at Apache Tech I definitely want to talk to them more about their beam angles. They are saying that their lenses are currently angled at 14 degrees and 50 degrees. This is something that might be a game-changer in my opinion (then again, maybe I’m just looking for the reason that NASA and Stanford decided to purchase the lights). The industry average is somewhere between 60 and 120 degrees. The wider lenses provide you more coverage area, but the narrower lenses provide more power and canopy penetration. Apache may have found an interesting combination of one-watt lights (for wider coverage and more efficiency) and 15 degree angles (for deeper penetration).

These are the narrowest lenses I’ve seen on an LED grow light. Does Apache know something the rest of the industry doesn’t or are they clueless? I’m hoping to find out soon.

The jury is still out on these lights, but the fact that the people at NASA and Stanford think they are worthwhile is a good sign. That being said those are two institutions that have the time and money to experiment. In addition they are fine with spending money on supplemental lighting. In essence, they are very different from your average consumer who wants to grow a few plants from start to finish inside. Has Apache Tech created a light that can effectively compete with HPS lights or have they simply created another LED that acts as a supplemental light? Unfortunately only time will tell.

My Outstanding Questions for Apache 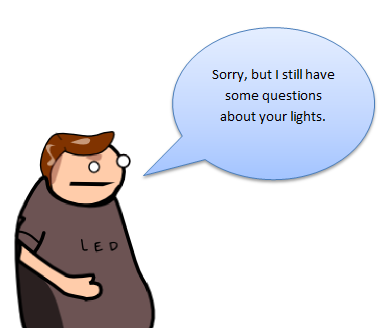 The fat LED man demands answers. Here’s what I want to ask the people at Apache Tech. Add your questions in the comment box below. Sometimes when I call companies out like this they respond back to me!

What’s the skinny with the lens angles? Do you know something the other companies don’t know? Did you develop some new technology to make the lens angles so sharp?

What’s the deal with all the white light in your 120 white and 120 white/red lights?

Why don’t you offer a 5-band or greater light like some of the competitors?

Which light do you recommend for us indoor growers?

What kind of coverage area do your lights have?

Is there any sort of trial period with these lights?

Are legal medical marijuana growers having success with your lights?

Feel free to add your own questions for Apache Tech Inc. in the comment box below.